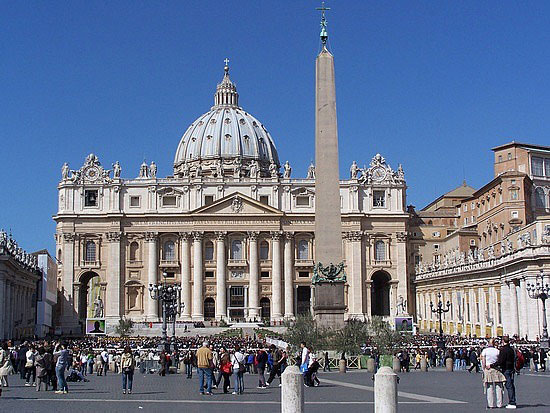 In front of the majesty of the largest church in the world one is struck first by the beautiful four- row colonnade of Bernini, in front of the Basilica, then the wonders that lie within it: Bernini&#39;s majestic bronze canopy, Michelangelo’s Pietà, Giotto’s Navicella mosaic, etc. The 330 steps that lead up the dome, designed by Michelangelo, allow you to enjoy a splendid view of Rome. Not to be missed is a visit to the Vatican Museums which include works by the greatest artists and the visit of the Sistine Chapel. 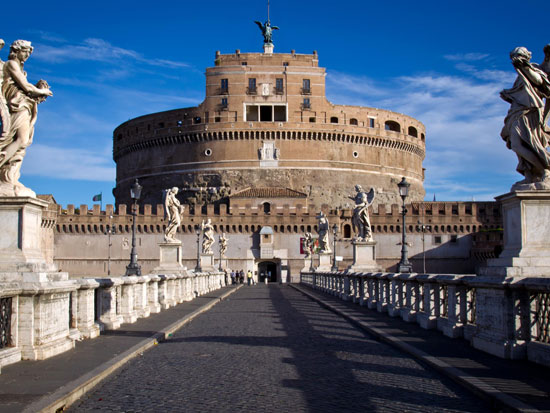 From St. Peter’s Basilica you can walk to Castel Sant’Angelo, which houses the National Museum of the same name. You can admire frescoes, stuccos and ancient furniture which decorated the papal apartments, but also an important collection of ancient weapons. Castel Sant’Angelo is well known among opera lovers: it is here that Puccini had Tosca’s heroine jump from  its ramparts to her death. 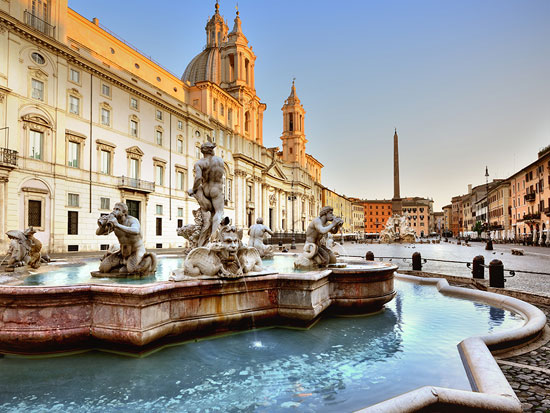 The view from the top shows the original arena design of this square, which was built on top of the Domitian Stadium. Here, you can admire three fountains, the fountain of the Moro, the Neptune Fountain and the most important, the Fountain of the Four Rivers (Nile, Ganges, Danube and Rio de la Plata) designed by Gian Lorenzo Bernini. As a tradition, during the Christmas holidays, the square is occupied by stalls selling toys and sweets. 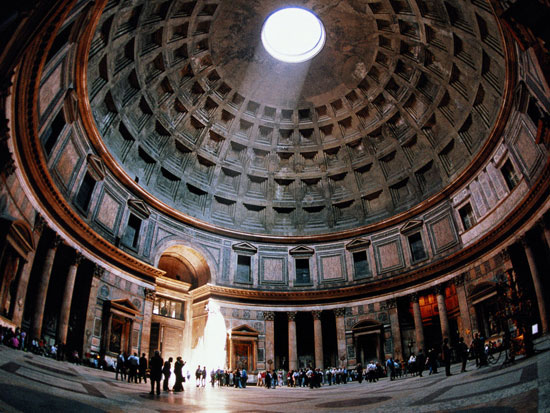 The Pantheon contains the tombs of the kings of the Kingdom of Italy and of important artists, including Raphael’s. The original Roman temple, transformed into a church, has an harmonic structure and is characterized by the insertion of a spherical space in a cylinder, since the height from the floor is equal to the measure of its diameter. Just outside the square of the Rotunda houses a fountain designed by G. Della Porta. 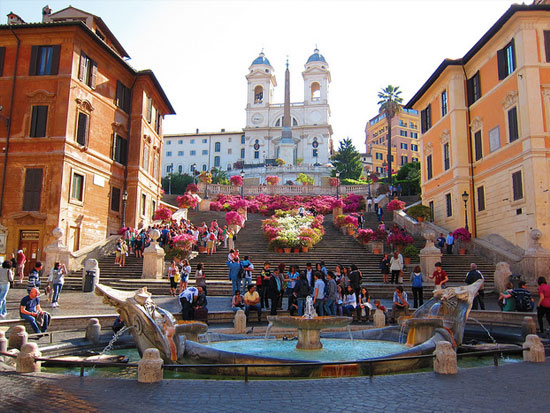 Is perhaps the most famous square in Rome, meeting point of tourists and locals. Its distinctive staircase was built by Francesco De Sanctis in 1723, while the fountain known as the “Barcaccia” (ugly boat) was built by the Berninis in 1629. At the top of the stairs is the church of Trinità dei Monti. From Piazza di Spagna you can reach some of the most fashionable streets of Rome. 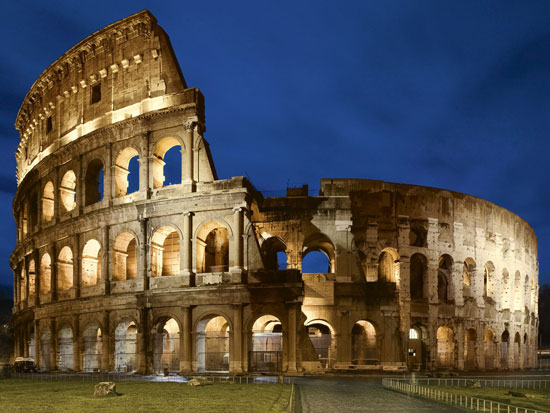 The Colosseum , symbol of Rome, was built by the emperors of the Flavian dynasty between 72-80 A.D. The largest amphitheatre of the Roman Empire housed about 70.000 spectators who watched the fights between gladiators, hunting of wild animals or to execution of inmates. In the Middle Ages it was transformed into a fortress, then in a quarry for building materials, and finally it became a hospital. Only towards the middle of the 18th century, Pope Benedict XIV stopped the looting and devastation, when he decreed it a  sacred place. 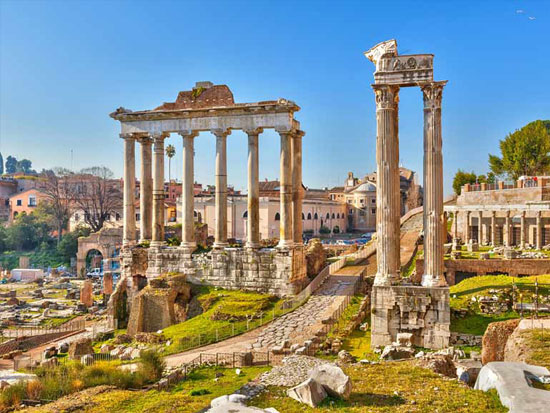 The Roman Forum, the most important archaeological area of Rome, stretches from the Capitoline Hill to the Palatine. As early as the 7th century B.C. this area was the centre of political, commercial and religious life. Later on with the addition of the Forum of Caesar, Augustus, Nerva, Vespasian, and the most impressive one, Trajan’s, the Imperial Forum was created. 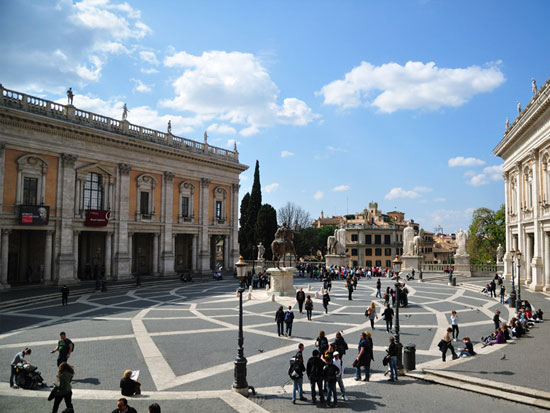 The square, designed by Michelangelo, is surrounded by three palaces: the Senatorial Palace – the seat of the municipal administration – the Palace of the Conservatives and the New Palace, which houses the beautiful treasures of the Capitoline Museums. In the Picture Gallery you will find paintings from the 14th to the 18th century by extraordinary painters such as Titian, Pietro da Cortona, Caravaggio, Guercino, Rubens, and many others. The centre of the square is dominated by a copy of the bronze statue of Marcus Aurelius, the plinth was designed by Michelangelo and the original is located in the adjacent Museum. 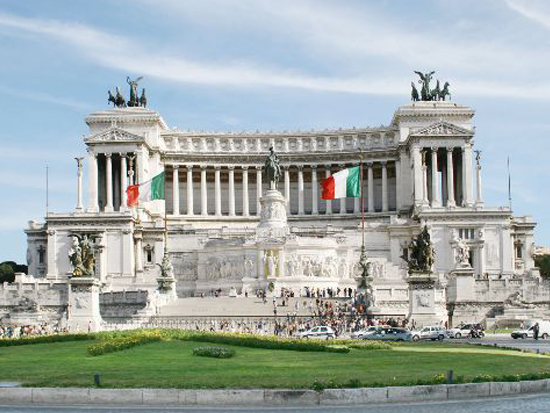 The Monument to Vittorio Emanuele II, the first king of Italy, is a monumental complex opened in 1911 on the occasion of the 50th anniversary of the Unification of Italy in 1921 and holds the remains of the Unknown Soldier. Inside stands the Museum of the Risorgimento and the Sanctuary of      the Flags. From the top you will see the whole of Rome. 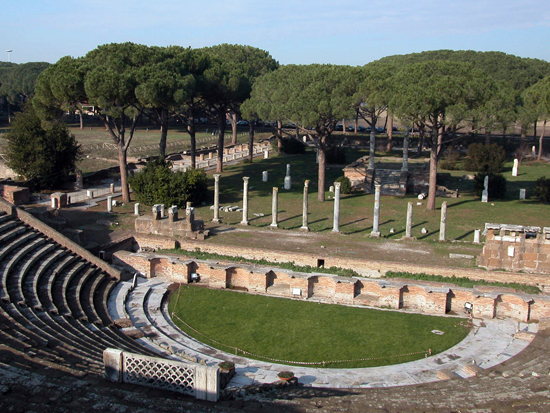 Founded around the 4th century B.C., as a military base between the coast and the mouth of the Tiber, Ostia became the commercial port of ancient Rome. Grain, oil, wine, precious marbles, animals for the circus arrived here from every part of the Mediterranean, and were often transferred to small boats that went up the river. From the well-preserved ruins is easy to imagine a thriving business and commercial centre, which took place around the forum, the thermal baths, the temples of the town by the sea. The decline of Ostia coincided with that of Rome, compounded by the gradual silting up of the harbour and floods that changed the course of the Tiber.
The excavations of Ostia Antica are easily accessible by train to Ostia Lido from Porta San Paolo (stop Ostia Antica) 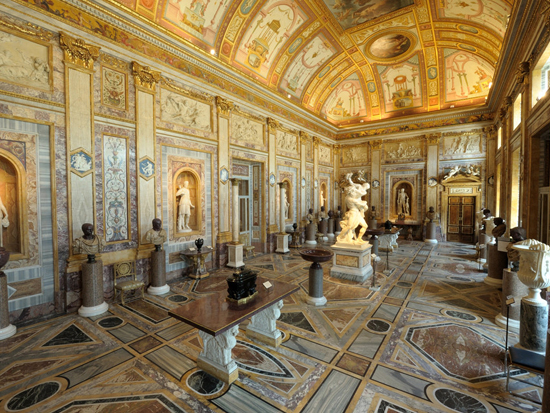 Located in the beautiful setting of Villa Borghese, the Borghese Gallery contains works collected by the powerful Cardinal Scipione Borghese, including treasures such as the series of sculptures made for the cardinal from the young Gian Lorenzo Bernini (Aeneas, The Rape of Proserpina, Apollo and Daphne, and David), the Sacred and Profane Love by Titian, Caravaggio’s masterpieces and the lovely Princess Pauline Borghese, Napoleon’s favourite sister, portrayed as Venus Victrix by Canova. The fusion of art and nature will allow visitors to taste even better works in the gallery, letting yourself be charmed by a typical Roman atmosphere. Please note that you need a prior booking to visit the Gallery.